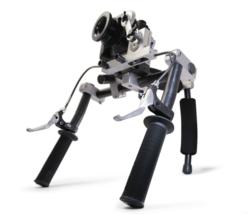 The SnapFocus delivers high production value on a low budget.

Midas Mount today introduced the new SnapFocus system for DSLR cameras. The SnapFocus allows filmmakers to pull focus and steady the camera on the move, making movie-quality images easy to achieve. The SnapFocus will be available on Kickstarter starting at $299 from May 30th through June 28th.

Using brake levers to control focus, the SnapFocus is incredibly intuitive. With an interchangeable set of gears, one pull of the lever will drive your lens a full rotation, no matter how much travel on the lens there is. “The SnapFocus empowers indie filmmakers to pull off Hollywood production value as a cinematic one man band.” said Brandon David Cole, Midas Mount founder and an award-winning filmmaker.

Cole graduated from NYU film school and cut his teeth on the sets of major Hollywood movies before directing three independent pictures, building his own equipment to make the films look more expensive. “My DIY gear added production value to my movies and helped sell them to distributors,” Cole said, “And with the SnapFocus I hope to do that for a new generation of filmmakers.”

The filmmaker bought a DSLR camera for his latest shoot and wasn’t impressed with the support gear on the market. “There was a lot of overpriced stuff or cheap junk out there I either couldn’t afford or didn’t want to own.” Cole recalls. So, with the help of a machinist neighbor, Cole built his own DSLR rigs and within a few months, his Skaterail Slider got picked up by a retail camera shop, EVS in Glendale.

Cole and his Midas Mount team then began to develop the SnapFocus. “Having focus control at the grip level of a DSLR rig made so much sense to us.” Cole said, “We wondered why companies continued to use the old system.”

Kickstarter, which recently raised more than $10 Million dollars for the Pebble watch, has become a legitimate way for entrepreneurs like Cole to raise capital without giving control to investors. “Launching this on Kickstarter is a perfect fit for us.” Cole says. “They are sort of a punk rock way of getting products out into the world.”

The SnapFocus will be available on Kickstarter starting at $299 (for those who pledge by Sunday, June 3rd). Other pledge amounts range from $5 for a limited edition SnapFocus sticker pack to $2999 for a wholesale package of 10 SnapFocus units.

Do NOT follow this link or you will be banned from the site!
Announcing The New Loaded Gear™ Brand Of Innovative Active ProductsNews, photo accessories
Online Photography Class Available: You can Take Better Photos NowEducation, News