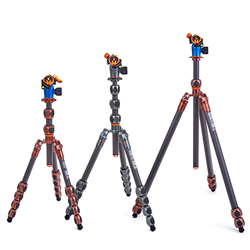 We’ve improved everything, from the internal leg mechanisms, to the patented, re-contoured Tri-Mount plate.

Building on the success of predecessors Leo, Albert and Winston, 3 Legged Thing have refined their Pro Range of tripods for greater versatility.

“The Pro Range, when launched in 2016, proved transformative for 3 Legged Thing, and quickly became an industry game-changer, in terms of technology and aesthetics,” commented Danny Lenihan, Founder & CEO, 3 Legged Thing. “Just over three years later I am incredibly excited to see the first re-incarnation of our flagship range hit the shelves. We’ve improved everything, from the internal leg mechanisms, to the patented, re-contoured Tri-Mount plate. Pro Range 2 is now the most versatile, functional and capable modular tripod system on the planet.”

All three tripods are available as kits or as stand-alone tripods in two colourways, Earth Bronze & Ocean Blue or Metallic Slate Grey with hints of British Racing Green.

Leo, Albert and Winston 2.0 all boast 3 detachable legs that enable the user to reconfigure their tripod into an incredibly stable monopod and/or boom arm. Additionally, all 3 legs can be removed and replaced with 3 Legged Thing’s range of footwear to create a table top or low-level tripod, or, if used with Stilettoz (long stainless steel spikes), anchored into the ground, making this new version of the Pro Range 3LT’s most adaptable tripod line-up to date.

Internally, the locks have been re-engineered with a new design of Chicken Lips (shims) that give the locks improved strength and creates an unprecedented level of stability. With Leo 2.0 and Albert 2.0 boasting load capabilities of 30kg/66lb and Winston 2.0 having a colossal 40kg/88lb capability, this new engineering fits with 3 Legged Thing’s aspiration to make the strongest, most rigid, functional and stable tripods in the world.

The new range maintains many of the functions for which the original Pro Range was renowned. These include a removable and reversible centre column on all tripods for extraordinarily low shooting and macro work; weight balanced leg locks for a lower centre of gravity to give greater stability; and a refined and contoured Tri-mount plate that enables multi-point mounting and attachment of accessories.

As standard with 3 Legged Thing tripods, Pro Range 2.0 all come with multi-purpose rubber Bootz which grip to a variety of surfaces, and a multi-functional carabiner tool. All models are compatible with 3LT’s footwear range, which includes Heelz, Stilettoz & Clawz and a new style – Vanz – dual-use footwear which combines stainless steel long spikes with a screw on ball foot.

Leo 2.0 kits include the brand new Arca-Swiss-compatible AirHed Pro Lever, a precision engineered ballhead which has a removeable and interchangeable lever locking clamp mechanism that is adaptable for right or left-handed users and can be used as a standalone device.

Both ballheads can be tightened into a variety of positions using the control knob. Both AirHeds have a panning base which enables 360˚ rotation. 3 Legged Thing have introduced knurling on all knobs on the AirHeds to improve grip and leverage, to enable users to secure their cameras in place. The AirHeds ship with the new QR-Octa quick release plate.

For a full overview of all the tripods in the Pro Range 2.0 visit our website here:
https://www.3leggedthing.com/pro-range

Headquartered in two converted chicken sheds (Shedquarters & Return of the Shedi) on Kinsbourne Farm, in Stagsden, Bedfordshire, 3 Legged Thing is a small, British company of passionate people, creating and innovating camera support systems for photographers and videographers. 3 Legged Thing was the winner of the Lucie Technical Awards 2017 Tripod of the Year, and 2018 nominee for best tripod and best industrial design.